It's been a long time, almost a year, but Hard Alley's Retroville opened January 30 with a huge party that packed the sim with 60-70 people for nearly 3 hours!  Be sure to come by and start some fun, fifties Roleplay today!  DJ Spirit will be hosting "Fifties Friday" parties every Friday night from 7-9PM SL time!  Lots of fun 50s events planned, and 50s attire is easy to find at one of the many retailers in the sim!  Join the fun!  Hope to see you there!

Here are some images from the sim taken from Spirit Eleonara's Flickr stream.

We are pleased to announce that after 9 months of planning, design, and building, Hard Alley's Retroville will officially open on Friday, Jan 30 at 7PM SL time!  We will be celebrating with a 50's party in the new Hard Alley Social Club!  Everyone is invited!

It's taken a lot of hard work by some very hard working, talented people like builders Jaimy Hancroft, Tito DeVinna, and McChris Flanagan, and support and planning by Spirit, Jade and the Hard Alley staff, but we think you are going to love it!  I know I do!

Take a peek below at some teaser pics taken and edited by Spirit Eleonara. Hard Alley is coming to an end, forever, on Nov 16.

Hard Alley, one of SL's longest running sites, and the first, original dirty urban sex roleplay sim, is over after over 8 years.  There is no future for Hard Alley.

But it DOES have a PAST!

We are pleased to announce Hard Alley's RETROVILLE, a beautiful, modern city set in the 1950s.  This is Hard Alley before it BECAME Hard Alley.  Before all the corruption and decay set in.  There will be many familiar landmarks, although they will be mesh and look 100 times better than the old prim-based buildings.  Lynden Labs now stands towering above the entire city, offering hope of a fabulous future of scientific wonders!  The Hard Alley Social Club is a classy, upscale establishment for the cream of society, and not the sleazy strip club we all know today.  Retroville College is a modern seat of academia, and not the run-down Reform School of present day Hard Alley.

There are also many new places in Retroville, giving players plenty of opportunities to explore, play, and find a place to fit in.  There's a new bank, police station, museum, casino, and much, much more!

Yes, Retroville is a gleaming example of a city full of hopes and dreams!

But we know what happens... we know what the future holds for Retroville.  Underneath all the chrome and neon, a darkness is growing.  Behind the picture perfect suburban lawns and the nicely tailored suits of the offices lies a city of greed and lust and deceit. 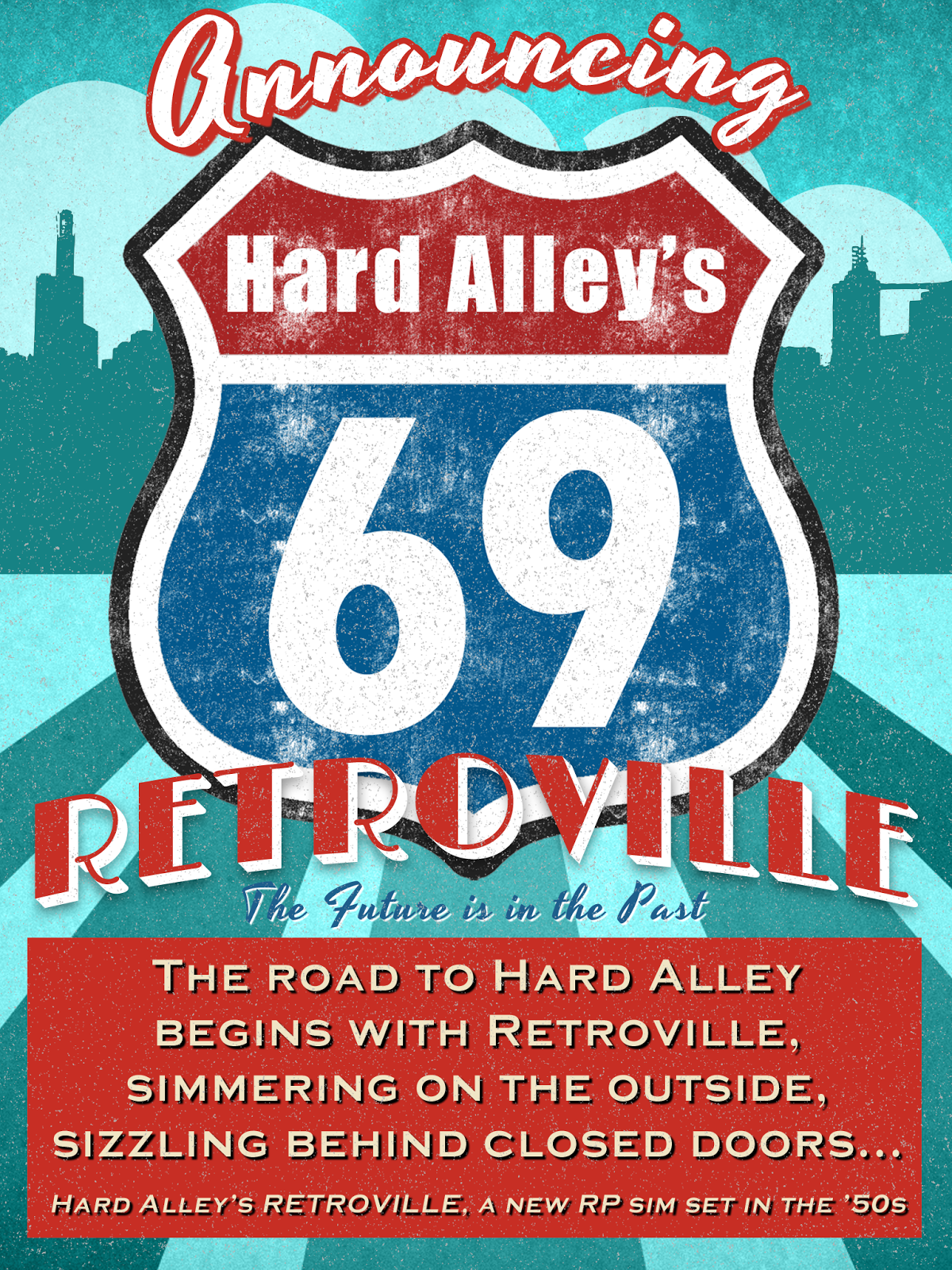 This is where YOU come in.

Retroville offers a fun, new, and different roleplaying opportunity.  You've roleplayed pimps and hookers and sleazy bikers at Hard Alley and other sims, but can you roleplay a suburban housewife who's secretly cheating on her husband with the Chief of Police?  Can you roleplay the busy executive who's staying late at the office for some board room fun with his secretary?  Will you be the waitress at the diner who's just trying to make ends meet by offering "special service" out back?

It's up to you to make Retroville work.  It won't matter how pretty and well built the sim is if no one is there to enjoy it.  Start thinking of your roles now!

Future blog articles will cover each of the four main districts in Retroville, and much more.

Retroville begins construction Nov 17, and will open to the public sometime in December.  The Hard Core Strip Club WILL REMAIN OPEN during the build.

We could have just rebuilt Hard Alley in mesh and called it a day.  It would have been fast and easy to plop down a bunch of cookie-cutter buildings off marketplace and said, "here's the new sim".

But that's not who we are.  We wanted to be different, and give you something better.  Two extremely talented builders, Jaimy Hancroft of Death Row Designs, and Tito DeVinna of Rule 34, have volunteered to build it for you from scratch, and it will be about 80% all-new, original mesh.  What they've done so far is amazing.

It's new.  It's different.  It's yours.  It's called Retroville, and we hope you will enjoy it. 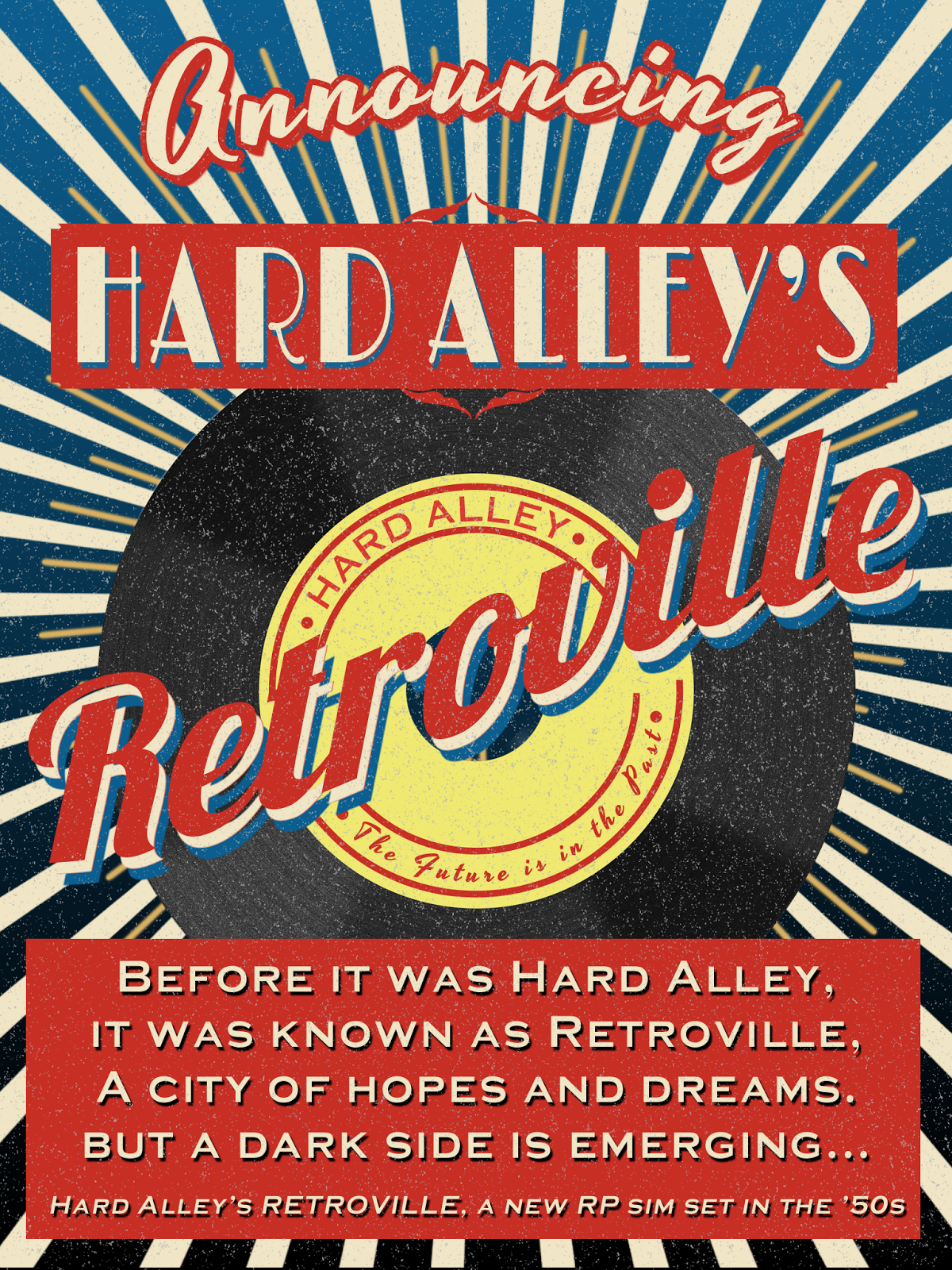 From now until Nov 17, only the central core of Hard Alley will remain.  The Strip Club will remain open, as well as plenty of areas to roleplay and enjoy, such as the Diner, the Asylum, the Back Door Club, Lynden Labs (what's left of it), and more!

The Cemetery remains until we have had our Annual Halloween Party (always the BEST party in SL)!  THIS IS WHERE WE WILL DISCLOSE THE FULL PLAN FOR THE NEW HARD ALLEY!  DO NOT MISS THIS PARTY!

After that?  It's the end of everything!  It all gets deleted!  Every last prim of the original Hard Alley!

We will close the sim off to the public, except for a temporary Strip Club up in the sky while we rebuild below.

The Strip Club will actually be very important during this rebuild period, as we will use it to adjust people to the new Hard Alley!  It should be fun if we can pull it off.  lol.

Here are some pics of the old Hard Alley areas that are gone...

While we are all waiting for the new Hard Alley, Spirit, Jadelyn and I thought we would do some "teaser" pics.  Each of them has a meaning and a purpose.  Of course, I'm not going to tell you what that is, otherwise it wouldn't be teasing. Yes, the new Hard Alley is being delayed.  The builders are taking great care to create a really awesome place for you to play, and that takes time.

This rebuild is not going to be easy.  We're not taking a bunch of mesh buildings off Marketplace and slapping them down and calling it a rebuild.  The new Hard Alley will be nearly 90% original mesh buildings, created specifically for Hard Alley.

Some of these new buildings are easier than others and take less time.  But the iconic buildings... the Club... Lynden Labs... City Hall... the Burlesque Hall... those are more complex and require more thought and planning and modeling and texturing.

I hope you will bear with us as we progress.  Our builders, Jaimy Hancroft of Death Row Designs and Tito DeVinna of Rule 34, are doing an incredible job and it is obvious from the work they have done that this is a labor of love for them.

I can tease you with one shot... one glimpse at the new Hard Alley.  I hope it makes you go "Wow!" like it did me when I first saw it.

Good things come to those who wait. The Destruction of Hard Alley

During the War with the Faction, many parts of Hard Alley were burned down or destroyed.  Spirit Eleonara did a series of pictures showcasing the destruction...


The end of Hard Alley brings with it many questions... What will happen next?  How will Hard Alley recover?  Is there a future for Hard Alley?

The answers to these questions is coming... soon. 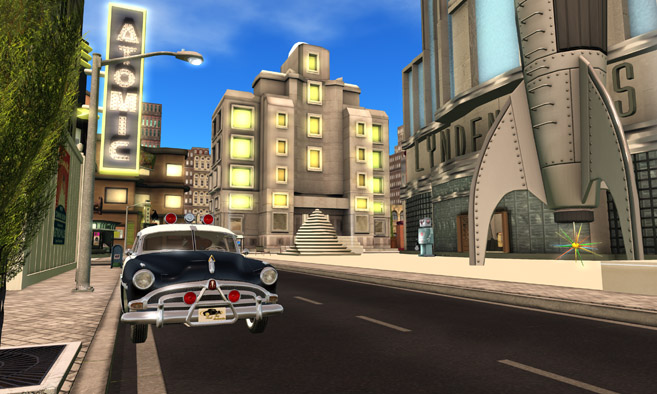 Hard Alley's Retroville is a roleplaying sim set in the 1950s. It's Hard Alley before it became dark and corrupted. Retroville is a shining city full of hopes and dreams, but even now there is a darkness growing in the shadows, hinting at what the future holds. Retroville is dedicated to a bygone era of innocence but with a hidden steamy side right under the surface, behind closed doors.

These People are Perverts!